Take the magic carpet ride of your imagination to Turkey. Join Annie and Ty in the caves of mysterious Cappadocia for another thrilling adventure.

A Cave in Nevshehir, Turkey 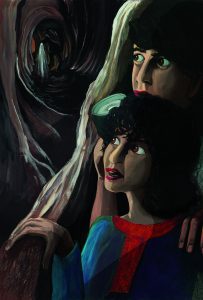 “I am afraid, Ahmet. I don’t want to go any farther.” The girl stamped her foot, the sound loud in the still cave.

“Oh, you silly little wussy cat! I told you, it is like the story of Hansom and Greta. I left a trail of bread crumbs for us to follow out of this cave.”

“That’s Hansel and Gretel, you great fool,” his sister shot back, momentarily distracted from her panic. Can I really trust this brother? What does he know about cave exploration? Really!

Her eyes took in the expanse of the chamber, water dripping from some dark place their flashlights could not reach. The stone was irregular and gray. The flashlight revealed only a small cone-shaped area, leaving the rest of the cave in menacing shadows and a deep black terrifying void. Yelda’s voice broke as she tugged on Ahmet’s sleeve. “Let’s get out of here,” she implored once more.

“What!” she said through quivering lips, her voice shrill. “You said this would be an adventure. You did not say anything about death traps.” She pulled more insistently at his arm.

Undeterred, Ahmet pushed his sister on. “I’m only kidding about the bread crumbs. I used string,” he admitted. “Come. Let’s see what’s at the end of this cave.” He grabbed her hand and Yelda followed, sniveling, her body tense.

Ahmet stumbled on a loose stone, pitching forward and dragging his sister with him. He didn’t let go of her hand in case she would give into her fear and bolt for the cave’s entrance.

“What if your string doesn’t help us?” Yelda said, her voice quivering with fear.

Ahmet ignored her pleas and pulled her along. Carefully picking their way, the two bumped against a boulder.

“Did this big rock move a little?” Yelda demanded.

Ahmet clutched his flashlight like a life preserver as he tested for footholds. He pulled his sister along, moving around the boulder. As he did so, the boulder teetered precariously. He couldn’t see how thin the ledge they were standing on was. As they both moved around the huge rock, it began to slide away from them. Suddenly, the thin ledge they were standing on cracked and Yelda and Ahmet began to slide downward along with the boulder and the broken ledge.

The sound in the cave was deafening. The fall took only a few seconds, but the result was a cloud of dust that left the explorers dazed and choking.

Yelda was too stunned to cry. Ahmet was still holding onto his twin sister’s hand and the flashlight.

“Stand up, Yelda!” demanded her brother, as he did so himself. “Can you walk? I seem to be okay.”

“Ahmet, if we ever get out of here,” hissed Yelda through gritted teeth, “I will kill you. Why, I say, Why do I ever listen to you?’

“This is no time for us to argue. We are in big trouble. We must find our way out of here.”

“Ever so smart, you are,” Yelda sneered. “In all of Turkey, there is not a more stupid boy!”

“Stop that! This is no time for your sarcastic poking at me, sister.” Ahmet sounded far more confident than he should have. “We need to think like the amateur archeologists we are.”

“Hah! You said it! Amateur!” Yelda choked back a sob.

“Get up,” Ahmet demanded. His terror was rising. He had to muster all his macho to push down the panic. They had fallen through the floor of an unexplored cave and no one back at the camp knew where they were.

Yelda got up feeling the seat of her pants. “I am either bleeding, or there is water here,” she said. “Did you lose the flashlight?”

“No,” he replied, realizing how tightly he was gripping it. “And it is still working.”

He played the beam around the new cave. It  revealed a high-ceilinged cavern. A perfectly smooth black expanse lay in front of them.

“Is that water? It could be a lake,” Yelda observed.

There was no telling how deep the water might be. This chamber was very different from the cave above. As Ahmet played the flashlight across the water, the wall on the far side of the cave sparkled as if encrusted with the glitter Yelda liked to glue onto everything she owned.

“Let’s see if we can find another way out of here,” Ahmet said as visions of their skeletonized remains decorating some deep chamber of this cave system spurred him on. Leaving the cave the way they came in was no longer an option, even with his carefully laid string.

“Maybe if we shout,” Yelda offered, but quickly added, “Maybe we need to save our voices.” She fell silent again.

“Ah! I have an idea. I will turn off the flashlight. We will close our eyes for a minute or two. When we open them we will be able to see if there is light coming from anywhere. There might be an exit nearby.”

Ahmet clicked off the switch. A velvety curtain of darkness brushed against them. Their ears seemed to pulsate, ready to pick up a sound, any sound.

“I am opening my eyes now,” Ahmet announced.

“I will not open mine,” Yelda replied. “If we don’t see anything, I will go crazy.”

Ahmet muttered, “Nothing. Maybe I need to close my eyes longer.” Yelda whimpered. Another thirty seconds.

“See what?” Ahmet hissed back. “Why are you whispering?” 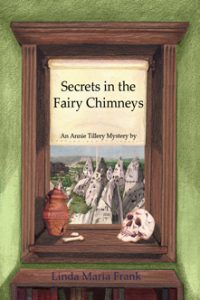 Secrets in the Fairy Chimneys Book