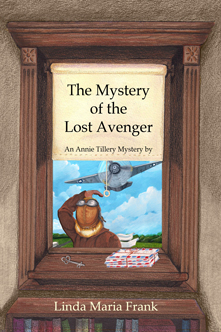 The Mystery of the Lost Avenger Book

The wreckage of a World War II plane is found in the mountains of Appalachia. It mysteriously crashed in 1943 on its way to a naval base. Inside the plane is a note, written by Annie Tillery’s great-grandmother, Charlotte, who was in love with a fighter pilot. Young Charlotte tested the planes and flew them to naval bases; her fiancé flew the planes in battle.

While investigating the crash site, NCIS finds the note in the plane, which they trace to Charlotte and then to her surviving family members, Annie and her mother Carol. The mystery begins. Why did the plane crash, and what does Charlotte’s note mean? Annie and her mother decide to dig into Great-Grandmother’s past by way of the aged family attic.

There, they find love letters written by Charlotte and her Navy pilot fiancé. There is a code to be broken in those letters and The Mystery of the Lost Avenger to be solved. As they explore, Annie suspects Charlotte’s ghost is reaching out to tell her something, but what? She enlists the help of her boyfriend, newly licensed pilot Ty Egan, but Annie feels she may be the key to her great-grandmother’s top-secret life.