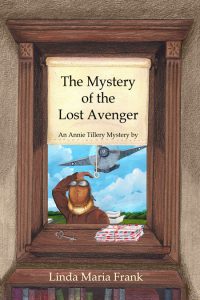 The Dangers of Flying Solo

Carol Wheeler sat in her car on a suburban street in New Windsor, Maryland. Her hand shook as she read the letter from the Department of the Navy for perhaps the twentieth time. It concerned something they had discovered about her grandmother’s role in World War II. The Navy had found a note in the wreckage of a plane that crashed in 1943, recently recovered in Appalachia. The note was traced to Charlotte Wheeler, Carol’s grandmother. Why had her grandmother put a note in a fighter plane that was being flown by someone else to a California air base? Charlotte had not been flying that plane. She did not die in 1943.

Carol pulled into the driveway of the home she grew up in and stared at it, memories of her childhood and school days flooding back. Maybe I can find something in the attic that will shed some light on this mystery. After all she did live here. Carol tucked the letter into her purse, shivering at the idea of entering that attic. Fishing in her purse, she pulled out the keys she needed to get into both the house, now occupied by a tenant, and the attic. I feel like a sneak thief, she thought. I’ll leave a note for Tallie. I don’t want her to think I snoop around here at will. I did send her a note. “Darn it! Why do I feel so guilty? I own this place,” she said, slamming the car door.

Gathering her resolve, Carol fumbled with the keys, finally selecting the correct one and entered the house by the side door, made her way to the second floor, and unlocked the door to the attic stairs.

“It smells the same. Probably nobody has touched a thing here since I put Mom in the nursing home. They’re going to put me in the loony bin if I don’t stop talking to myself.”

The heat in the attic produced a sheen of sweat all over Carol’s body, making her a bit light-headed. I’ll have to get out of here fast, she thought, propping the door open.

“Good. The trunks are where I remember them. Before she died, Mom told me all the family mementos are packed inside of them.”

Carol approached the trunks. Two were stained oak with barrel tops, bound in brass straps. The hardware was beginning to show signs of rust. The third one was a maroon steamer trunk, the kind used by immigrants bound for America on ocean liners. This was the one she opened. A strong smell of cinnamon and cloves rose from it. Inside were packets of letters. She scooped them up, and put them in her tote. The second trunk held picture albums. “It’s too much to carry. I’ll have to come back with someone.”

Curiosity got the best of her and Carol lifted a few framed pictures, turning them to the light from the single bare bulb. She gasped. The young woman in the one photo that fell out of the group looked back at her like a mirror image. The photograph was signed in the bottom right corner, Charlotte. My grandmother, Carol mused. That could just as well be me, she thought.

The door to the attic slammed, making Carol jump and clutch the photos to her chest.

Carol ran to the door, pulling at it. It was stuck. She put the photos on a bureau and pulled at the knob with all her might. The door opened, nearly toppling her to the floor. She looked down the long hall where the door to the rest of the house stood open. A woman with a carefully pinned up-do of blonde curls, in a knee-length floral print dress was heading to the floor below.

“Tallie, is that you? Wait! Who is that? What are you doing in my house?”

There was no answer. The photo of Charlotte popped into Carol’s head. She shook herself to clear that vision, her hands trembling.

“That’s impossible,” she whispered. She put the photos back in the trunk, grabbed her tote, and ran out of the house. Heart pounding, Carol dropped the keys as she tried to lock the door.

Safely inside her car, she said, “What in the world was THAT? I’m not coming here alone again, she thought. Turning to the house, she muttered, “I don’t believe in ghosts, but did I just see one?”