I interview Jim Smith on The Writer’s Dream, and he responded with these comments. I have included links to the interview.

Because Linda is an experienced interviewer and an author herself, she posed two questions that I rarely had faced in about 110 previous speaking engagements and media interviews:
1. How did the experience change me? Seeing the carnage left by North Vietnamese attacks and by American bombs, bullets and projectiles took away any thoughts I may have had about war being glamorous. I had a mini-nervous breakdown in 1975 as the South was overrum by the NVA, I worshipped with the Quakers for seven years and joined Veterans for Peace. I also became involved with United Veterans Beacon House, which runs homeless shelters for veterans and others. I did not join a VFW post until 2017, when I joined Henderson-Marino Post 1819 in Port Washington, N.Y. I was named Adjutant there.
2. Is there such a thing as a just war? I said that our response to the 9/11 attacks, the war in Afghanistan, was a just one, but I felt the war in Iraq was not. That does not mean I want to diminish the service of our troops there. They followed orders and did their duty. But I think that war was built on a lie: that Iraq had weapons of mass destruction. It was really about regime change and George Bush’s crusade to finish a regime his father had failed to terminate. I also told Linda that I felt WW II was a just war, to combat dictators and hateful ideologies.

This was one interview where I thought the interviewer really understood myself, my view of my service (I’m proud to have served) and my thoughts on war. I am happy to say that I will be interviewed again on Sept. 19 at LTV by Joe Giannini on his program “Gung Ho.” 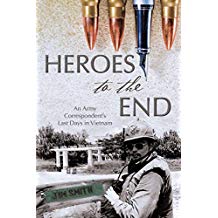